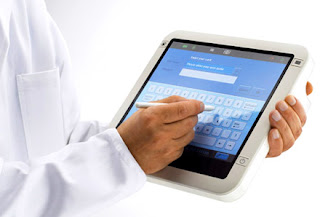 A survey of studies from recent years shows that health information technology has benefited healthcare providers, even small practices, refuting other recent findings that suggest electronic health records and other health IT do not produce positive effects for patient care.
Previous studies focused on the early years of electronic health records (EHR) when functions were not as mature, according to one of the authors of the survey article, Dr. David Blumenthal, the national coordinator for health IT.
Furthermore, the survey found evidence of emerging measurable benefits for small practices in addition to the larger health IT leaders, such as Kaiser Permanente and the Veterans Affairs Department, which have been the source of much experience data in the past, he said at a March 8 briefing sponsored by Health Affairs journal to announce its latest published studies.
“Two salient aspects of this more recent synthesis is that it brings the literature up to date and extends it beyond the few large systems that were the source of most information on the record for health information technology, and looks at it in a much more representative set of provider settings,” Blumenthal said.
In the survey of 154 peer-reviewed articles from 2007 to 2010, the article found that 92 percent of the studies reached conclusions that indicated overall positive effects with the use of health IT, he said.
As far as the  time and cost for deploying an EHR is concerned, Dr. Neil Fleming, vice president for healthcare research at Baylor Health Center System, said that it cost its HealthTexas primary care providers $10,325 per physician and took 134.3 hours to put the EHR into practice.
The time was split between chart loading and working with the physicians, he said. For a five-member practice, EHR implementation cost $7,857 and 130 hours.
“The level of support services from vendors is a critical factor,” Fleming said.
Another study concluded that more than four in five office-based physicians could qualify for the meaningful use incentives, said one of its authors, Brian Bruen, lead research scientist and lecturer at George Washington University’s School of Public Health and Health Services. He suggested that ONC monitor where gaps in eligibility and use emerge.
Blumenthal said that regional extension centers, which ONC established to assist primary providers with overcoming the technical hurdles to adopting EHRs, have signed up 50,000 providers nationwide. And almost 34,000 providers have registered with the Centers for Medicare and Medicaid Services to participate in the meaningful use incentive program to date.
CMS has already paid $34 million in incentives under the Medicaid program to 216 Medicaid providers in four states, Blumenthal said.
Meaningful use puts a floor on the capacity and performance of electronic health systems and creates a market for the technology, he said. That market now consists of 450 certified EHRs and modules produced by 280 companies, of which 64 percent have fewer than 15 employees.
“Here is a microcosm of robust innovation in a market created by the new federal program of incentives,” he noted.
Current and past ONC staff members, in addition to Blumenthal, authored the paper, “The Benefits of Health Information Technology: A Review of the Recent Literature Shows Predominantly Positive Results.” The other authors were Melinda Beeuwkes Buntin, director of ONC’s office of economic analysis, evaluation and modeling; Matthew Burke, ONC policy analyst; and Michael C. Hoaglin, former ONC policy analyst.
Despite the focus on health IT, the “human element” is critical to effective EHR implementation. The association between the assessment of provider satisfaction and negative findings is strong. That underscores the importance of strong leadership and staff “buy in” if systems are to successfully manage and see benefits from health IT, according to the paper.
There is also a need for studies that explore how to resolve the challenges of implementing health IT, the aspects and tools of EHRs that physicians find the most difficult to use, and the training and support that are needed for implementation.
Posted by Unknown at 8:07 AM